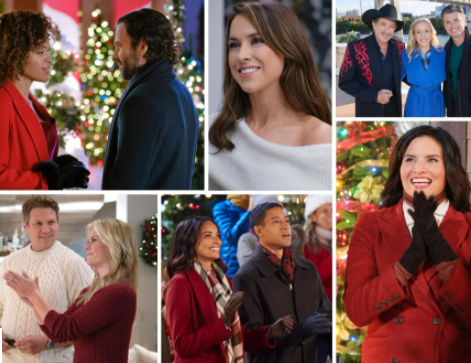 A wedding planner ends up in a remote Alaskan town and falls in love with its Christmas pageantry, as well as the local man helping her find a rare flower.

An acclaimed pianist rediscovers her passion for music while spending the holidays with an ex at Château Neuhaus in Germany.

An aspiring lawyer winds up helping her boss’s younger brother care for his orphaned nieces and nephews over the holidays.

A woman unexpectedly takes the Royal Family of Galwick during a storm, where she teaches them about her Christmas rituals.

A single mother takes in an unexpected guest over Christmas, and the two quickly form a strong connection.

On the 12th Date of Christmas
Premieres: 11/8
Stars: Mallory Jansen and Tyler Hynes

A pair of game designers butt heads while creating a romantic urban scavenger hunt themed around the 12 days of Christmas.

A professional violinist rediscovers her passion for music (and a potential new partner) while performing in Vienna.

A man time travels from the turn of the 20th century all the way to 2020 and experiences Christmas at the historic mansion he once called home.

Inspired by the Charles Dickens classic, this is the story of a TV producer working on a country music special who gets a visit from the ghost of her mentor. The appearance forces her to reconsider her life path.

A family at a crossroads reconnects over Christmas, all facing their own challenges. One son is waiting on adoption news for him and his husband, while another rekindles a high school flame.

A woman planning a Christmas celebration must convince a firefighter to let her use his spruce tree for the festivities.

A pair of adversarial TV show hosts are sent to cover Christmas festivities in the same small town, discovering that they may not be enemies after all.

A woman trying to get a critic to write a positive review of her father’s bed and breakfast inadvertently falls for him.

A woman trying to save her family’s restaurant is offered a unique arrangement by the heir of the development firm that wants to tear it down. If she pretends to appear as his legal counsel they’ll save the Starlight Café.

A woman grapples with the cancellation of her Christmas dream wedding, and a dance teacher helps her pick up the pieces.

If I Only Had Christmas
Premieres: 11/29
Stars: Candace Cameron Bure and Warren Christie

A happy-go-lucky publicist and a jaded business owner work together to help a charity.

Two women work together to help launch a museum, while one grapples with the future of her relationship.

A romance writer’s column is cancelled, and she returns home to spend Christmas with her family. Unexpectedly, the man responsible for the end of her column pursues her romantically.

Former school classmates have to work together to make it home in time for the holidays after a storm.

A newscaster still mourning a lost love gets an unexpected second chance when she finds herself back in time at a Christmas carnival five years ago.

A woman is hired by the Marcadian Royal Family to repair a carousel, and must do so by Christmas.

A restaurant owner discovers she’s actually Jewish and connects to her new family over the eight nights of Hanukkah.

A music store owner works to save a historic shopping district from being destroyed, but finds that her new love interest is connected to the developer who wants to get rid of it.

A baker discovers that a mysterious client and a charming widower who recently moved to town are the same person.

A couple on the rocks has to pretend everything is going well to help their town’s Christmas festival on television.

A woman must renovate her home so she can help care for the children of an ailing neighbor.

A journalist investigates the story behind an antique engagement ring with the help of the ring owner’s grandson.

A violinist reconnects with an old friend while grappling with an accident that has paused her music dreams.

A mother must plan her son’s wedding with the help of the bride’s uncle after the planner unexpectedly quits.

A doctor must decide between a job far from home and the revelations of a mysterious man from her past.

The discovery of a lost charm bracelet leads a jewelry designer and an investigative journalist to try and return it to its owner before Christmas.

A journalist searches for the person who grants people’s wishes in a town, and encounters a childhood friend along the way.

A reporter on a Tiger Cruise over the holidays meets and falls for an officer aboard the boat, and uncovers a mystery along the way.

Time for Us to Come Home for Christmas
Premieres: 12/5
Stars: Lacey Chabert and Stephen Huszar

Five guests who share an unexpected connection are invited to spend Christmas together at an inn.

A man ends up stuck in traffic next to his old high school flame after moving with his family to Hawaii.

A wealthy heiress spends the holidays in a small town, eventually falling for a handsome fireman.

A couple are given a strange key and an enigmatic riddle that launches them on a yuletide adventure.

An antiques dealer and a cleaner try to figure out how to scale down a glamorous estate around the holidays, eventually connecting with the home’s mysterious owner.

A woman who has served as her town’s unofficial Santa Claus finds her own wishes coming true after helping a little girl.

Below is one of our very favorite Hallmark Christmas movies, “Christmas On The Range” from 2019 (Full Movie)